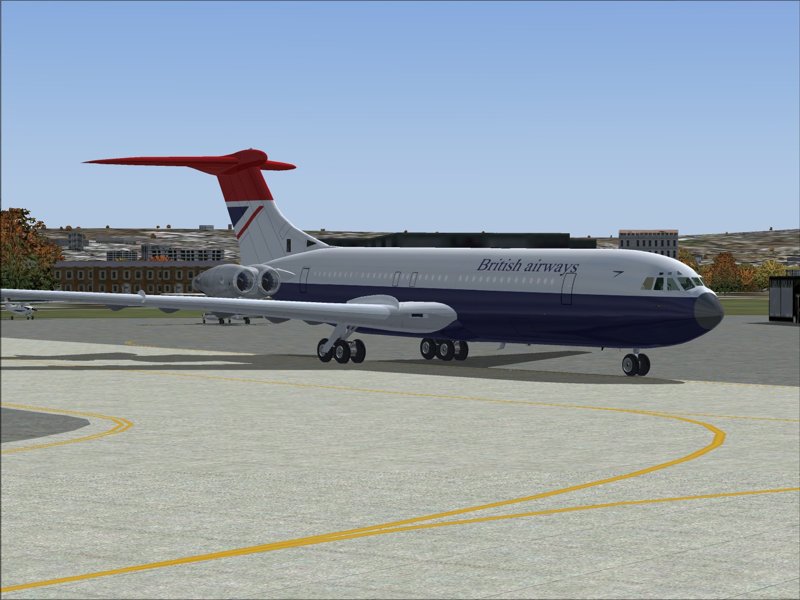 The Vickers VC10 is little known outside the UK, but at the time of its production, it was one of the most advanced airliners ever designed. The origins of this intercontinental passenger jet lie in a project called the V.1000, whose development history was remarkably similar to that of the Boeing 707, in that Vickers promoted it as a strategic transport for the RAF, while they were actually keeping their eye on the much larger civil market. Although the V.1000 had much in common with the RAF's Valiant strategic bomber, the military order was cancelled only a few months before the prototype was due to fly - and de Havilland having sewn up Britain's airline orders with the promised Comet 4, the V.1000 ended up in the breakers yard and Vickers back at the drawing board.

The fifties were not the best time for aircraft development in the UK, chiefly because senior management failures had resulted in companies that produced planes without asking if anyone wanted to buy them, while the airlines, in turn, behaved like some kind of nightmare date and changed their mind about what they wanted every five minutes. Several world class businesses went down the tubes in this period, simply because they blew capital on prestige projects that served no useful purpose, the Bristol Brabazon and the Saro Princess being but two examples. So it surprised no-one when BOAC, which at one time would hear no criticism of the Comet 4, suddenly realised that the plane lacked the range and the carrying capacity to service the North Atlantic routes and bought the Boeing 707 instead.

There things might have lain, had it not been that BOAC drew up a new spec for a plane to service its Middle Eastern and African routes, with a performance criteria that neither the Comet 4, nor the 707 could hope to fulfill. Vickers, who hadn't given up hope on the V.1000 and had kept the design team ticking over, submitted drawings for a plane with a capacity of 151 economy class passengers seated in a six-abreast cabin. Thrust was provided by four Rolls Royce Conways mounted in pairs at the rear of the fuselage and they topped the ensemble off with an extremely aesthetic T-tail. It was the most elegant design ever submitted for a large airliner since the Constellation and everyone who saw it was immediately impressed, but the beautiful lines belied the sophistication of a plane, which had, among other novelties, one of the first twin autopilot systems, allowing it to be certified for fully automated landings in nil visibility. The VC10 also had the quietest and most vibration free cabin in its class, coupled with a very high performance wing that was fitted with enormous Fowler flaps, allowing it to land in the sort of places normally reserved for much smaller planes - and BOAC, having ordered 35 with an option on 20 more, kept on changing its mind with monotonous regularity, before eventually settling on an order for 12 'standard' VC10s and 8 'supers', which left Vickers up salt creek without any clear form of propulsion. 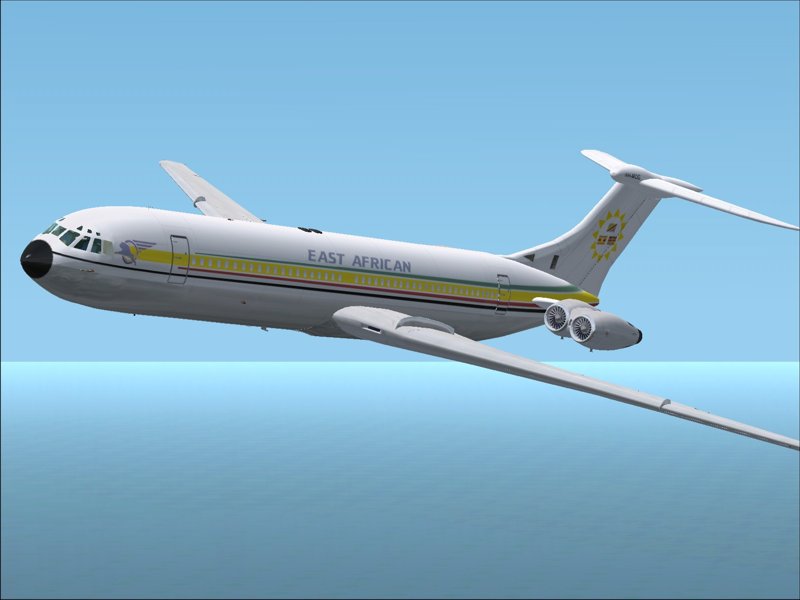 Vickers' problem was that thanks to BOAC's spec, the Standard made too many compromises between performance and economy. The Super dispensed with the Standard's hot and high performance in return for a greater payload capacity - but it took a long time to develop and this, more than anything else, is what finally killed Vickers' chances of making a success of the jet age airline market. In the end, various small airline orders meant that 32 Standards and 22 Supers were built, an unimpressive total in Boeing's terms, but a small victory for Vickers, who must have wondered at times if they would ever get to build the plane at all. The Super arrived far too late to be attractive to overseas customers and ultimately fell victim to Boeing's masterful marketing strategy - but it was the nearest thing to a magic carpet available at the time and its pilots loved it.

David Chester has made a Super VC10 available via his company, Abacus Systems Ltd (not to be confused with Abacus Publishing Inc., which is a totally different flight simulation developer). As an addon, one of the things that makes it interesting is that it is one of the few commercial packages that has been developed entirely by one person - David did the lot, the visual model, the panel, the sound set, the flight model and the packaging, with the help of Nick Snook, who did the flight testing for him. After a good deal of initial tweaking, the VC10 is now at version 1.05, but unless David changes we suspect it is likely to carry on being improved with further point updates. The package is a 31 Mb download and the automated installation requires the entry of a alphanumeric serial number, not unlike the one used to register a copy of Windows. Checking the hard disk revealed a new program group with a lonely icon for the VC10 uninstaller, documentation being restricted to a scattering of fairly concise html files in the addon's root folder - these cover the workings of the main panel and the autopilot sufficiently well to get you operational, but users who can't get by without 250 page PDFs giving detailing emergency bus tie procedures will have to look elsewhere.

Seven liveries are included: two for British Airways, one in the 'old' livery and one with a 'Union Flag' tail; BOAC; East African; two for the RAF K3s, one of which is a special AI tanker which deploys its hoses automatically between 14500 and 25500 feet - the idea being that you can set up AI flights and practice "refueling" from them using a suitable jet fighter. There is also an icon on the panel of the non-AI K3 which allows you to extend the hoses; just remember to wind 'em back in before you land! All the usual animations are included, the operation of the flaps being a real eye opener if you have not seen a VC10 before, and the wheels hang realistically after takeoff. The textures are fine and I was getting frame rates around 30 on the threshold at London Heathrow, which means that most systems should be able to run the addon without too much difficulty.

The 2D cockpit uses a much sharper graphic than the early versions of the VC10 and is much better for it, though there is still some blurring in places, particularly where the overhead is concerned. Various pop-ups are available, notably the yoke, the overhead, the engine and fuel panels, the radios and the 'zoom' panel. These are controlled via a couple of rows of simicons and the latter brings up a larger version of the main panel to make instrument flying easier. If you have used the King Air, there won't be too many instruments there you won't recognise, the most sophisticated pieces of kit being an early horizontal situation indicator (HSI) and a mach meter. 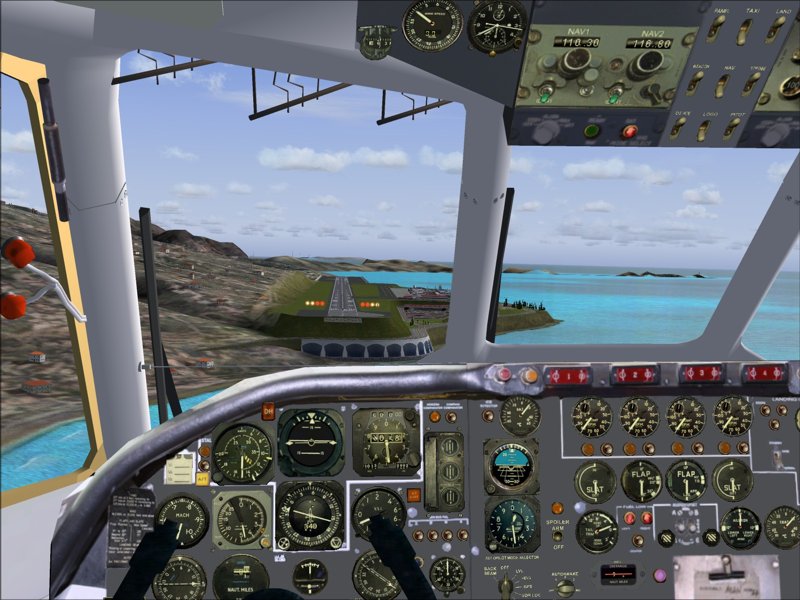 The screenshot alongside should give a good idea of what you are getting, which is a simulation of a fairly high time plane - a far cry from the way most addons are presented. Since airliners don't make any money if they aren't moving, few pilots ever get to see a new one and cockpits get to look like the one shown here remarkably quickly.

A word about the autopilot might be in order - VC10s used inertial navigation systems, but the sim uses the default GPS in lieu of this. However, if you want to do it the hard way, the autopilot has both mach and speed hold in addition to the usual heading and nav hold features; it will also manage climbs to a preset altitudes and glideslope intercepts. By the standards of its day, this was a superb unit and it was one of the reasons why the VC10 was so popular with the pilots who flew it.

One nice touch is a couple of icons near the center of the panel which allow you to 'adjust' the seat height up and down to get a better view - and in a standard install you get all the 2D cockpit views, which adds to the realism of using this particular mode. The virtual cockpit (VC) is fully clickable and can be used to fly the plane without any difficulty at all. Having something like ActiveCamera fitted will let you navigate around even more quickly.

I can only judge the flight model on what I have read, but I would say it does justice to the real thing. VC10s were immensely powerful aircraft and although they took their time to get airborne, they fairly sprinted to height once the wing was cleaned up, which allows some extremely steep climb outs. Given that the plane was designed specifically for the purpose of operating out of hot, high fields, this isn't surprising, but just watch what a full throttle climb does to your fuel flow...

The sound set is suitably barbaric, thanks to all those Conways in back. The VC10 might have been quiet inside, but it wasn't difficult to hear them coming and a full throttle departure from Heathrow used to drown out the conversation for several minutes.

In summary, a good piece of design, with very few bugs - this isn't surprising because David has shepherded this sim through several versions already. Version 1.05 makes an interesting package even better, but the best news of all is that David is rumored to be working not only on a 'Standard' version of the VC10, but a Trident 3B and I am sure his many fans can't wait to see them.